Digestion Starts in the Mouth

The digestive process starts in the mouth where food is chewed. The chewing of food is called mastication.

Besides the breaking of food particles into smaller particles and allowing the saliva and enzymes to enter inside the large food particles, mastication sends a signal to the body to begin the whole process.

As research has shown, both the chewing of food in the mouth and the activation of taste receptors signals the neural system to start responding to foods even before it leaves the mouth. This is because the taste of foods triggers the production of acid in the stomach lining (cephalic phase of digestion) which helps the stomach to respond to food while in the mouth.

Salivary glands secrets saliva that moistens the food to improve the chewing and grinding. Saliva supports this process in that it has enzymes that begin the breaking down of fats and starches.

What happens in the esophagus?

This is the condition that happens when the acid contents of the stomach escapes into the esophagus. However salivary bicarbonate (component of saliva) clears any acid that escapes from the stomach. If this condition occurs more frequently than it should, it leads to a situation called GERD (gastro esophageal reflux disease).

Digestion in the Stomach 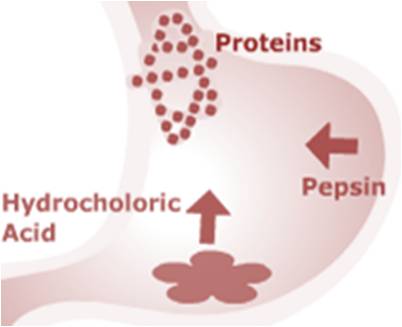 The stomach has two chambers - the upper and the lower.

Stomach is the first place where protein are collected and broken into small peptides. Bacteria and other potentially toxic microorganisms that may have entered the gastrointestinal system through the mouth are decontaminated in the stomach due to its acidic environment. The gastric lipase which is responsible for fat hydrolysis in humans is secreted in the stomach.

Before food is delivered to the intestine , it is stored in the upper stomach(the fundus and the body).Here the gastric fundal mucosa produces hyndrochloric acid  and also secretes the enzyme pepsinogen.

Hydrochloric acid destroys toxins in food such as bacteria and untwist the complex three dimensional protein chain through a process called denaturation of the proteins. pepsinogen is activated by the acid to become pepsin which acts on the denatured protein by cutting the bonds between amino acids in the protein chain resulting into smaller chains.

What happens in the small intestine?

This entire inner expanded surface is called the brush border of small intestine and contain disaccharidases such as sucrose, maltase and lactase which breaks down the monosaccharides into their individual sugar molecules. 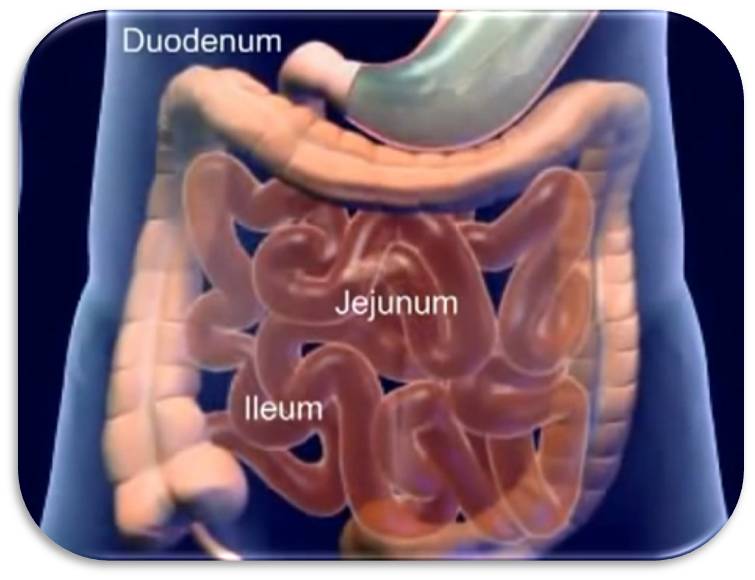 Small-intestine has three parts namely; duodenum, jejunum and ileum. It is in the duodenum (first segment) where the neutralization of acidity takes place so that more enzymes may have a conducive environment to further break down the macromolecules still present.

Enzymes such as chymotrypsin and trypsin cuts protein and peptides into one-two-three amino acid chains while amylase is involved in hydrolyzing the starch. Iron and calcium are few nutrients absorbed in the duodenum.

A lot of nutrients absorption including that of vitamins and minerals take place in the jejunum (second segment) through a process called active absorption. Nutrients are taken through the cell wall of jejunum by protein carriers into the portal vein which deliver then into the liver.

Ileum (final part) completes the digestion of nutrients and reabsorbs bile salts . It is the place where Vitamin B12 is selectively absorbed in the body.

What happens in the large intestine? 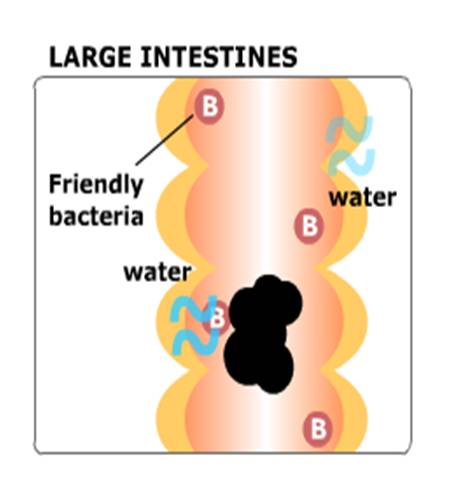 Large intestine conserves water and sodium that escape absorption in the small intestine. It is important to note that food spends more time in this section than anywhere else.

In the stomach, food takes on average a half to two hours; two to six hours in the small intestine and it spends around 72 hours here before its finally removed  by defecation.

The large intestine has friendly bacteria (probiotics) that ferment much of the fiber hence producing many nutrients that are necessary for the health of colon cells through a process known as colonic fermentation. Probiotic bacteria also keep pathogenic and other disease promoting bacteria from colonizing the colon.

The fiber which escapes fermentation provides bulk for stool excretion and bids the removal of waste products and other toxins through the stool. The elimination of stool is controlled by the rectum and the anus.

What happens in the pancreas?

Most of the enzymes that are necessary for digestion are produced and secreted in the pancreas and are released in pancreatic juice which is enriched with bicarbonate that neutralizes the acid in chyme.The pancreas is considered as protein factory.

The body tissues are protein in nature and stands at a risk of being digested by the pancreatic enzymes. Therefore to avoid self digestion the pancreas produces the enzymes in inactive form called the zymogens or proenzymes. For instance, trypsin is among the enzymes that are responsible for protein digestion. In its inactive form it is produced as trypsinogen and gets transported to the intestine where protease enzyme activates it to trypsin.

What happens in the liver?

The liver is a major organ which can be said to be a clearing house. It reviews the compound that has been taken in and distinguishes the toxins and other molecules which are eliminated through the kidneys inform of urine or through the intestine inform of stool.

The liver produces bile that helps in fat digestion and excretion of cholesterol and other fat soluble molecules. Most of the proteins that circulated in the blood are synthesized in the liver.

The liver is involved in maintaining a healthy blood sugar (glucose) level either by providing glucose from digestion or breaking down glycogen into glucose.

What happens in the gallbladder?

The gall bladder stores the bile acids produced in the liver. The gall bladder is signaled (after a meal is taken ) to release its content in the small intestine for fat digestion.

From Digestion to Healthy Eating